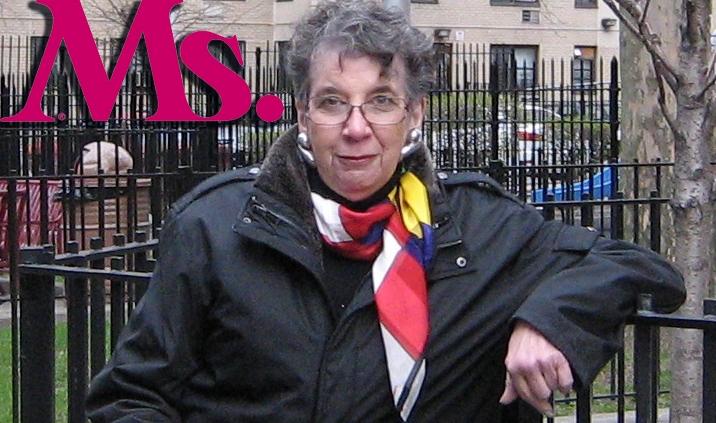 On this day in May 1939, Sheila Michaels was born.

A female rights activist and oral historian, she started popularising the use of ‘Ms’ in 1961 as an alternative to ‘Mrs’ and ‘Miss’, and gave women everywhere the option to start demanding equality wherever their title was used in reference to them.

She recognised that women should not have to use a title which depicts marital status, because men don’t.

It wasn’t an easy task, despite receiving support from a New York congresswoman and Gloria Steinem who launched and published ‘Ms’ Magazine in 1971. Sheila lamented:

“It was terribly frustrating, because no one wanted to hear about it. There was no feminist movement in 1961, and so no one to listen. I couldn’t just go ahead and call myself ‘Ms.’ without spending every hour of every day explaining myself and being laughed at, to boot. I had to learn to be brave.”

You could argue in some ways, that those who want to be treated equally are living in even tougher times now than they were In the 1960s. Fifty years ago, if a woman demanded that her title be changed on documentation, a previous unwanted title could have been struck out with a pen, or the document newly typed out and re-filed in the cabinet.  ‘Computer says no’ was not an excuse for refusing a change, so hopefully, for all those women who decided to become a ‘Ms’, the process was easy. (Hopefully!)

A customer service assistant these days can only refer to you based on the limitations of their drop-down lists. If the title you want isn’t available to select, it’s tough luck.

Ask for ‘no title’, and you might as well ask to go to the moon! – Or at the very least, you’ll get it, but then may receive future communications referring to you as ‘No Title [First Name], [Surname]’.

The only way of getting around stating a title based on marital status is to grind your way through years of training to gain a professional one. Not an option or route for everybody.

Sheila succeeded in driving huge change, with what she modestly called ‘a timid eight year crusade’. It was only during a New York radio slot in 1961 where she mentioned the title when her campaign started to gain momentum. As a member of the Congress of Racial Equality, she was determined to put her stamp on a volatile world. She launched several pickets against the Miss America Pageant and was also instrumental in getting the term ‘feminist’ accepted as a term replacing ‘women’s liberationist’.  She travelled a lot, lived in several different countries, married and divorced. She died of leukaemia, aged 78, on the 22nd June 2017.

So what does the future landscape of titles relating to marriage look like now, and has the title of ‘Ms’ achieved all that Sheila Michaels would have set out to do?

Whilst the title of ‘Ms.’ is widely recognised as a title option, even today, businesses are being called out on Twitter for not giving individuals the option of choosing ‘Ms.’ in their title drop-down lists (Cadbury’s customer service, and Purple Bricks to name but two).

James Valentine of ABC Radio Sydney asked for thoughts on the title of ‘Ms’ on his live show in September 2017.

“I was astonished at what I heard.

One listener Jacklyn said when she heard Ms, she felt that the user was making quite an aggressive statement: “None of your business” is what Jacklyn heard.

Not neutral but a forceful rejection of any inquiry about relationship status.

She agreed that Mr didn’t have any of that power, but use of Ms always left her feeling like the woman had something to hide.

She said she couldn’t understand why anyone was so concerned with concealing their marital status.

Gabrielle called and was adamant that it meant divorced. Ms to her was only used by women after divorce because they could no longer be Miss or Mrs.

Several divorced women texted and called in to say that’s how they use it.

Toby, a woman and a definite ‘Ms’, says that even though she is feminist through and through, at the primary school where all of the women teachers are still Miss, any who introduce themselves as Ms she assumes they’re lesbian.

And that interpretation became the one that everyone started to agree with.

Yes, they said, when they heard ‘Ms’, ‘lesbian’ was what they assumed.

And then others called to say that’s why they don’t use it. They understand what it should mean but they don’t want to be misinterpreted.”

Statistics on marital titles are extremely difficult to find. Ironically because they are not part of an individual’s legal identity, and therefore ONS merely gathers data on the status itself, rather than the title. So how do we know whether more women are choosing ‘Ms’ than ever before? Or what the patterns of increase in usage of ‘Mx’ are?

Practical Androgyny quotes that 1 in every 250 people are non-binary, which at the very least proves that many people are at varying stages of re-assessment of the identity impressed upon them by society.

“One day stores will no longer have gender classifications. Instead the consumer decides how and what they want, rather than the social engineering of corporations. The concept of gender will be extinct.”

This was quoted in September 2018 – and how disappointing is the promise of ‘one day’ as a timescale for the gender identity freedom movement.

Mainstream retailers are indeed moving towards gender free departments (Hamleys), and clothes (John Lewis) and there are several progressive campaigns to ensure that children feel free to build their interests in a less gender pressured environment (Let Toys Be Toys).

In summary, while there remains three titles for women and one for men, (seeing as the take-up of ‘Mx’ by businesses as a title alternative has been woefully low), there will never be true freedom from the connotations associated with marital status titles, and the easiest solution for all is to surely walk away from all non-professional titles.

To continue without progress is to do Sheila’s memory a disservice. She wanted equality, and until businesses make the changes necessary to become title free, women – and those wishing to live a gender free life – will always be limited by references to their gender, their father, and their husband.

How can you help the GoTitleFree mission? – become an ambassador, or complete our survey and tell us what you think about marital status titles. Thank you.

Me and my I.D. – The importance of identity for good mental wellbeing

Game Set and Match – One step closer to achieving gender equality in ... Scroll to top