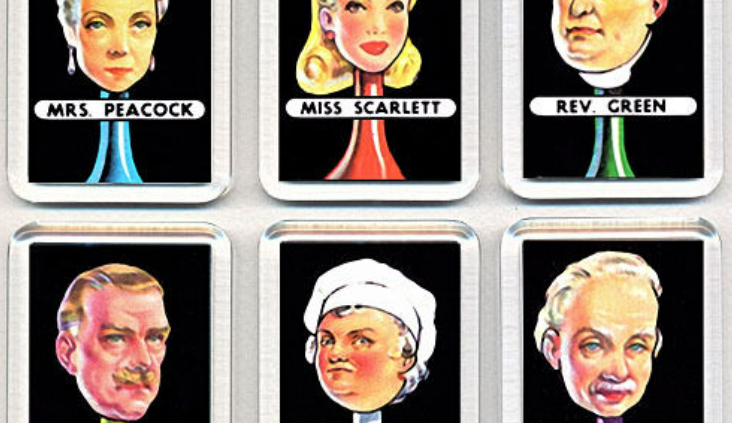 1) Playing Cluedo with my kids:

It was a harmless enough game, (aside from a tantrum from my 4yo and a conversation with my 7yo about, ‘the sorts of things that would kill a person if you hit them over the head with them’).

We were well past the explanation of the game and into the dice rolling before I even realised that the characters on the board were either men with professions, or women with titles. Why?

The game was created in the 1940’s, but Waddington’s and Hasbro have had plenty of opportunity to address the characters and names and make appropriate changes.

They did so with another game of theirs, Guess Who, in 2012 after a huge social media campaign instigated by a six year old. Characters in Guess Who are now more representative, not only pleasing E,D&I allies, but also genuinely making the game much better to play.

Perhaps Cluedo remained unchanged because the character names weren’t as key to the purpose of the game as the descriptions in Guess Who are to it’s own objective.

Cluedo is a game I’ve played throughout my life, and the characters are clearly such an ingrained element of the game in my mind that I hadn’t even thought about the names or the marital status titles.

In fact, after a bit of research afterwards, I found that the characters HAVE been changed slightly.

Mrs White has been replaced… by Doctor Orchid, (a woman) and Samuel Black (the owner of the mansion).

Not in the habit of admitting fault, I would still like to see further improvement to the game and the names. There are still titles relating to marriage, which could be replaced with first names. And the owner of the mansion COULD have been a woman. (I’m just saying!)

But back to the point… why did it take so long for me to see the inequalities represented by my own older version?

Why didn’t I think about the characters in my earlier produced game of Cluedo until I was well into the game?

As mentioned, I’ve since contacted Hasbro asking them to re-address the inequality represented by the characters in the spirit of creating a more gender equal future, and avoiding supporting gender biases with young people. I’m still surprised at myself however, that in four years of campaigning against the unnecessary usage of marital status titles, I haven’t thought much about Cluedo or board games which promote out-of-date or unequal concepts.

2) Driving my daughters to a holiday club:

I was unlucky enough to be cut up by a Porsche swerving in front of my Beetle at the motorway slip road.

Not one for road rage, I calmly tutted, “Oh you just go right on ahead Mr Porsche!”

And my four year old squeaked from the back seat, “Mummy… you just said ‘Mr'”

And she was right! – I HAD said ‘Mr’… even though I hate titles, and I hadn’t even seen the driver.

I’d neatly assumed that the driver of this offending Porsche, was a man.

I spent the rest of the journey to the holiday club, and back home again, reflecting on my biases about ‘male’ and ‘female’ car makes and models… and also feeling incredibly proud of my daughter. Because she checked me on my gender bias.

She raised my unnecessary usage of ‘Mr’ straight away, and will hopefully continue to educate other people throughout her life.

The two examples above demonstrate how deep rooted our biases are. Distracted by the pressures of motorway driving, I made an assumption I would never make sitting in a quiet house at my desk.

Games we play, especially those we played in childhood, are the things which embed neurological patterns in our minds. Just like remembering the songs from our youth, and the smell of our school, and way the rough carpet at the library felt under our crossed legs, memories of language are vivid.

These patterns are the sources of our biases and our mistakes which usually surface in moments of mental overload or tiredness.

“When we look at bias, it is absolutely critical to start by defining it on a continuum,” says Kay Formanek, author of the recently published book, Beyond D&I: Leading Diversity with Purpose and Inclusion.

“On one end, we’ve got explicit, or conscious bias. That means we are aware of it and often execute on it. The most extreme explicit bias is discrimination. This type of bias played out on a systemic level, e.g. in apartheid in South Africa, where people legally segregated on the basis of race.

On the other end, you’ve got unconscious bias, we often call it ‘hidden bias’, because you are unaware of it. It is not related to one’s morals or values, but occurs because we become hardwired by our society—we’ve absorbed messages from our families, our community, the media, and our life experiences that lead to unconscious beliefs.

It means that we treat people differently depending on their appearance, their background, etc. In a nutshell, bias is a prejudice in favor of or against an individual or group. It is important because it hinders equity, because some people are favored over others and obtain a benefit or advantage.”

So we all have biases, but that’s no excuse to habour them, accept them, or see them as a part of our nature which cannot be changed. It’s recognising the biases, and acting upon them which is what makes the difference between being remaining biased, and growing as a person, and as an inclusion ally.

I thanked my daughter for correcting me. She’s four years old, and hopefully her immediate recognition of my mistake means she’s starting life with fewer biases to unwind than I did. I’m grateful to her, and will always be grateful to any person who helps me on my continued learning journey.

Things to know this quarter about the GoTitleFree campaign…

Have a lovely summer and see you all soon!

Why using ‘Mrs’ holds women back